My mum used to prepare pasta dishes for us in the traditional way, by making the sauce, boiling the dried pasta and combining them at the end, although I am aware there is a school of thought that insists the sauce should be sitting on top and not combined.

I was watching the TV the other day, as one does during a pandemic, and saw a lady from Valencia in Spain cooking the pasta with the sauce in the same way as you would do a risotto – by adding water slowly so that it is gradually absorbed (with all the yummy sauce flavour) into the dried pasta.

Anyway, I thought I would have a crack at this last night so I pulled the following out of my fridge and pantry for inspiration… 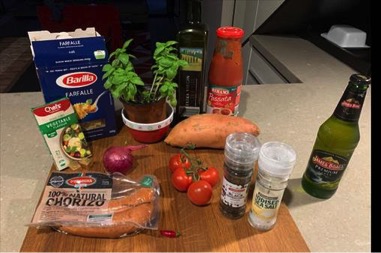 (The beer is not part of the recipe. That’s for me). Note the single chilli. Don’t let its diminutive size fool you, those little suckers really pack a punch. 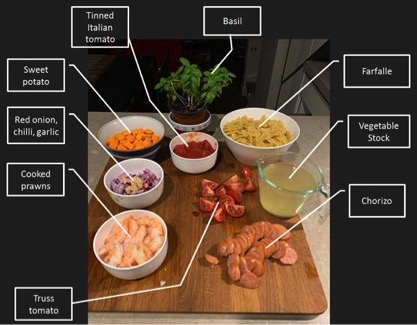 Notice that I dropped the salt, as there will be plenty in the vege stock, and I also found some frozen cooked prawns in the freezer that I thought would work well.

I started by boiling the sweet potato cubes in a small pot for maybe 2-3 minutes just to soften them up a little. Not too much because we’re going to fry them after. While that was happening, I started frying the onion, chilli and garlic in a tablespoon or so of oil in the frypan.

The sweet potato was then transferred to another frypan with a little oil to brown up the cubes. Gave a bit of a stir every so often, then removed them to a plate when they were more or less evenly browned on most sides. 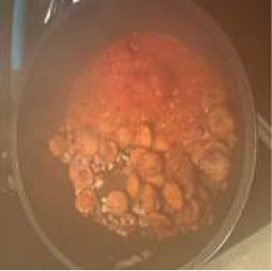 While frying the onion, the chorizo was added in with it.

Kept frying until the onion was soft and the chorizo had a good colour, then added the tinned Italian tomato and brought to simmer…

Then threw in the farfalle, with about 125ml of the vege stock and kept stirring. As the farfalle absorbed the liquid, the sauce would start to thicken up and more stock was added. Eventually ran out of stock so just kept adding hot water.

After 12 minutes or so the pasta was nearly al-dente, so added in the prawns and fresh tomato and kept it going for another minute or so, just to warm them up really.

Plated up a generous dollop with some sweet potato cubes on top and some fresh basil. Had imagined accompanying with a nice light Sangiovese I had from Two Italian Boys, but Geraldine had already popped this Bordeaux. It worked just fine. Yum. 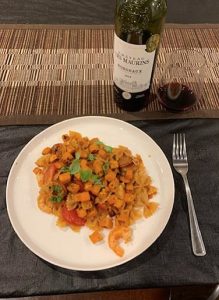 Signup for news and insights